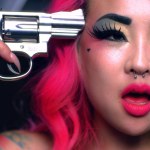 Hip-Hop Artist King Fantastic spins the loaded gun in this daring music video as seen through the eyes of director Randal Kirk II. On Q is the follow-up to “Why? Where? What?”, a video about a maid who vandalizes the home she is tasked with cleaning while dancing to King Fantastic’s song. That video got over a million hits, so the pressure was on for Randal to deliver another blockbuster. He recalls “when I started coming up with the concept, I was fond of all the gun sounds in the audio production of the track and the sexy female vocals.” Randal eventually decided on using famous alternative pin-up models, engaged in a game of Russian strip roulette. “The song glorifies the gangster lifestyle. My message in the video is that you love the lifestyle so much you that you die for it and enjoy every minute!”

On Q was shot on a Red One MX camera using Zeiss Super Speed lenses. It is a pairing that a number of DPs I have worked with prefer, as they combine the softer qualities of these older lenses with the ultra-high resolution of modern cameras. Brett Pawlak elaborates: “These days for me it really comes down to the aesthetic of lenses, how they hold flares and how they shoot wide open. That is where you really see the characteristics of the lens and get interesting looks”. That is perhaps the reason why the raw images already had a natural ‘grit’ to them.

While the Red One has become a staple of music videos and commercials due to its affordability, availability and the great images it can expose, Brett also explains that “it is a camera that I know well, and there is no question as to what it can do when pushed. It’s very good at holding saturation, and since Randal was looking for a pop look, I picked the Red as I knew that it would POP”.

Brett’s lighting package consisted of a couple of 4x Kinos, 2′ Kinos and a handful of Par Cans. “Those lights give me the most variety that I know I can work with, on a budget”. He also had some HMIs and regular tungsten units, but prefers open-faced lights over fresnels: “I’d rather start with more light since I can always diffuse and shape with flags. An open-faced 2K is close to the output of a 4K, so when you need light, on a budget, that means a whole lot!”

For the Club Scene, Randal really wanted something special. He and Brett had spent some time studying a similar scene in the film “Black Swan” and concluded that those colour changes were being achieved in post – “we lit [the scene] with one solid gel colour.  I decided to light the club up blood-red. It wasn’t until we transcoded the footage and Brett played with the colour and achieved a rough black light colour by pulling out the red.” This gave Randal the confidence that the look they wanted could be achieved in post. Despite this, Randal still pushed for some in-camera effects, such as placing a prism over the lens to distort the image. From there the images were treated by Chad Simcox, the editor and motion graphics artist, augmenting the camera effects with a custom filter similar to a kaleidoscope effect.

This became the starting point for the four looks I would go on to create, the most interesting of which was my ‘Neon Look’. As we started to push the colours, this ended up being Randal’s favorite look in the entire video!

I started out by setting my contrast level, with my blacks pretty rich to play against the saturated colours I was planning on creating. The second step was the interesting one, which basically added a ton of blue to the highlights and a good amount to the mid tone. This skewed the already present red towards a magenta tone, creating some interesting interactions between the original red and the added blue.

Now, with a new ‘electric’ base, I picked a broad range of reds/magentas as the inputs colours and boosted the saturation by over 300%. This made the cooler foreground stand out against the much warmer ‘background’. The next step was a technique that I use from time to time: ‘phased vignettes’. This is the name I give to a vignette which has had it’s hue (phase) rotated. I pulled the red background almost back to my manufactured blue and darkened it. An additional layer of colour boosting the saturation really made the colours pop, much to Randal’s satisfaction!

Randal was clear with his crew from the start: “I wanted the Russian roulette scene to feel like a room that Dexter would make, but with showy lighting to glamorize the violence.” That location ended up being a grimy dark dungeon of a warehouse in downtown Los Angeles. The desire to beautify the violence went as far as the instructions he gave to JusticeFX, the guys doing the VFX. Randal jokes “these kids are incredible. I told them I wanted realistic violence while making it sexy. That’s a hard task to do. These guys really nailed it though!”

For me, it was about creating colour tension, which is something I have written about before. I wanted the warehouse to feel cooler, so I pushed a ton of blue across the board while pulling down hard on the blacks. The saturation in the blue created an almost electric look, while the deep blacks gave the feel that the performers were coming out of the shadows.

From there onwards I treated it like a ‘beauty’ video, focussing on soft, healthy skin tones for the models, creating natural glows around the highlights in their faces and hair, while bringing out the detail in the intricate tattoos they were each adorned with. The juxtaposition between the cool environment and warm and inviting faces creates drama, which is what this music video is all about.

On Q was intended to be a viral video created to promote the brand. Because of the graphic and violent content, it would never air on TV, but Randal is not particularly concerned since he designed it to live on Vimeo. Brett broadly agrees: “If the only version that exists lives on the internet, then that is where it belongs.” This train of thought is not necessarily consigned to just music videos, as our industry shifts from a broadcast-style way of distributing content to niche-casting, delivered either by streaming platforms like Netflix or Hulu, or directly from the web itself through sites such as YouTube and Vimeo.

You can check out the final music video on Vimeo and more stunning visuals by visiting the Gallery.