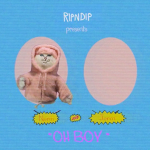 Shot and directed by photographer Tony Kelly, this latest commercial for American Apparel pits the superb talents of two break dancers – Lil Demon and Jalen – against each other in this high-rise dance off.

Tony was searching YouTube one day for break dancers and came across these two world champions separately. He had the idea of bringing them together for the first time, and having them battle it out against a glamorous backdrop, instead of the grimy surroundings usually associated with the breakdancing scene. The commercial is shot on the rooftop of American Apparel’s HQ in downtown LA to showcase the company’s new kid collection.

For this shoot, Tony paired a Red One camera (MX sensor) with an Angenieux 25-250 zoom lens. The entire commercial was shot at 120 fps for a slow motion effect that is cut to classical music – a strong contrast to the breakdance performances. Tony wanted a colourful, youthful look with glowing, bright faces full of life.

This was easier said than done. Since it was overcast on the day of the shoot, only the dancers in the foreground had any colour in them; the background was almost completely grey. In this situation, it becomes very difficult to pull an accurate key because you are missing the Hue component for an HSL (Hue, Saturation, Luminance) qualification. A different approach is needed.

I began by adding contrast and increasing saturation a little. You need to be careful though: cranking up the saturation in a desaturated image will introduce noise – the opposite of the clean, youthful look we a going for. Instead, I decided to pull a couple of ‘loose’ keys on the background buildings and then the skyline, adding some warmth in the former and some blue to the latter, creating an almost duotone effect. Because we are introducing colour instead of saturating what is already there, we end up with crisper, more uniform colours. For the sky I further restricted my qualification with a feathered ellipse, essentially graduating the amount the blue added. Now with a much ‘cleaner’ set of colours I applied overall saturation before bringing out the faces a little that were now buried in the contrast.

This approach can work when you are going for a more ‘fluid’ look, where you really don’t care about colours spilling into each other. The pastel feel of the background helps the break dancers in the foreground stand out. Overall, the client was thrilled with the way we managed to transform the overcast photography into the colorful images you can see in the Gallery.

You can see the full commercial on Vimeo.

You can see more of Tony Kelly’s amazing work here.