Cinematographer Salvador Lleo shoots and directs this latest music video for KUDO. “This is guerilla-style shooting at it’s best – no permits, no lights, no crew!” Lleo jokes. For this one I had to pull out all the stops, charging through a multitude of looks that needed to move with this hip-hop artist’s style.

Salvador shot this music video all around Downtown LA – Broadway, bridges, tunnels, the LA river – as well as Hollywood Blvd. He used an upgraded Red One camera with the new MX sensor, combined with a standard set of Zeiss T2.1 lenses. The increased latitude in the blacks was instantly apparent as I started pushing in contrast using S-curves; the blacks remained rich despite being bossed around.

I crafted no less than seven looks for this music video, each covering a different location and mood. We wanted to combine ‘classic’ looks like Hi Con Black & White and Fashion-style photography with a more ‘urban’ approach for Hollywood Blvd, the bridge and tunnel scenes, as well as Poster effects for some sections (see below). Making it all ‘work’ together was a matter of keeping the contrast snappy and the images rich with detail.

The Hollywood Blvd. look was the most challenging. Initially I used lift and gain to add contrast, and then slightly cooled off the blacks. I picked up the highlights using a luminance key and stretched them almost to clipping point and added some blue. To push in the deep greens and blues into the blacks, I brought down the black point in my red and blue curves. This has the effect of ‘creeping in’ the colour (look in the shadows of the door) vs. oversaturating the image with green/blue.

To give the image some ‘bling’, I did two things: first I applied a soft vignette, rotating the hues at the same time. This was carefully planned, with the blues shifting to rich yellows, creating a warmer outside ring that counter balanced the cooler centre. Then I addded more yellow and saturation to the already golden skin tones and hot highlights, giving me a combination of cool and warm highlights. I call this ‘colour tension’, and this can be quite effective with the right application.

You can see the Befores and Afters in the Gallery.

A series of freeze frames are used to punctuate this music video. Salvador wanted something special for these. I came up with the idea of turning these frames into graphic-style posters, relying on a tool I unfortunately rarely get a chance to use: Colour Map.

At a basic level, Colour Map allows you to define a gradient in the Pablo Paintbox™ and apply it to an image, replacing the colours in the picture with the hues in the colour map, while retaining the relative luminance values. The effect is extreme, but provides a good starting point for our poster.

Once I had applied the colour map, I then brought back the artist’s skin tones by using an HSL qualifier constrained by a roto-spline. I desaturated the skin tones and pushed a lot of contrast into them. This makes him stand out from the background. To finish it all off, I went back to the Paintbox™ and painted some mattes, which I then used to dodge and burn the corners, creating some variety in the green and orange grads.

The final result shows the ‘poster effect’ I was after, and literally took just a few minutes to create in the colour timing session.

The ‘gas mask’ setup was also fun. Salvador shot this in an open door garage, draping a 20 x 20 unbleached muslin cloth to block out direct sunlight and diffuse KUDO’s edges. For these ‘moving posters’ I cranked up the contrast to whiteout most of the background. I then created a ‘wraparound’ glow effect by qualifying a luminance matte and then growing and blurring the matte, while increasing the gain. Finally, I saturated the blues and used an Unsharp Mask filter with customised settings to create a graphics style look.

My collaboration with Cinematographer Salvador Lleo continues with Tsuyako, a story set in postwar Japan, where a factory worker and mother must decide between duty and love, her family and freedom. The short was directed by Mitsuyo Miyazaki in her home town back in Japan.

The five and a half day shoot was a gruelling one, with 14 hours of footage for a running time of 27 minutes. Capturing that amount of footage in that short amount of time also meant that compromises had to be made, specifically with the lighting setups of each scene. Welcome to the world of Indy filmmaking!

The images that Salvador has captured for Tsuyako do justice to the textures and the nuances that come from hundreds of years of aging. This is the kind of stuff that is hard to reproduce on a soundstage, and from the images below you can see why. The weathered wood, the scratched steel, the dirt and grime and hard graft are all on display. For Tsuyako, Salvador used a set of standard speed Zeiss lenses T2.1, along with his Red One camera. He felt that “the low contrast and soft quality of the glass helps to round off the ‘digital edge’ of a super high resolution digital camera such as the Red One”. And he’s right, because in the absence of film stocks, you need to make the glass work harder in order to create the images that you want. Salvador’s philosophy is that “the pairing of old and new was optimal for creating a more organic and filmic image that is in tune with the period piece”.

The factory scenes were a lot of fun to colour time, specifically because of the way that Salvador used fluorescent lighting: as a fill light to his warmer tungsten key light. The secret to working with any fluorescent source from a colour timing perspective is avoiding clipping. Although this may sound like common sense, it is even more profound when using this kind of light source, because fluorescents tend to leave a horrible green ‘residue’ around the clipped areas vs. daylight or tungsten. Keep the whites legal though and you will get some strong yellow/green seeping through the image that will add body to any industrial-type setting.

Tsuyako recently won the Future Filmmaker Award at the 2011 Palm Spring International Shortfest. You can read about the awards in the festival press release here, as well as in the Hollywood Reporter and Variety.

For more stills from the movie, visit the Gallery. 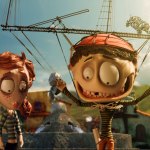 This is one of the prettiest pieces that I’ve ever worked on! Animator extraordinaire Jonathan Ostos Yaber combines stop motion animation with CG and matte paintings to bring to life the story of a Puppet Artist who chases his dream all the way to the big city, leaving behind what he loves for what he desires most.

There is a specific discipline when working with images that are already both vibrant and exceptional, quite often the case with stop motion and CG. The very richness of the images can also be the problem, and focussing the attention of the audience becomes the main task. For Sr. Alambre, I used many soft vignettes to create some ‘spot lighting’, and also blurs the foreground and the edges in some shots to simulate shallower depth of field.

As beautiful as these three images were to begin with, they all had their challenges. The first one felt flat and looked like a night scene lit up by a tungsten moon! I simulated some mixed lighting by pushing some blue in the shadows around the characters, but kept their skin tones warm to indicate the light reflecting off the canvas. Some soft vignetting also helps focus the eye. The second image is much more surreal, and therefore I augmented much of the pastel colours with some saturation in the mid tones while retaining cleaner highlights. The third image is all about drama, and shows an example of selective blurring to simulate a shallower depth of field. I also isolated Sr. Alambre using some qualifiers to lift him from the background, and snapped the contrast to create an almost Hi Con look.

Sr. Alambre is one of those shorts that’s a real labour of love. The thought and effort that’s gone into it is evident, and the story is relatable to any artist who’s struggling to make it big. It’s been an Official Selection in so many festivals the filmmakers have lost count!

Check out the gallery for more stills from the movie, or watch this festival darling in its entirety on Vimeo.